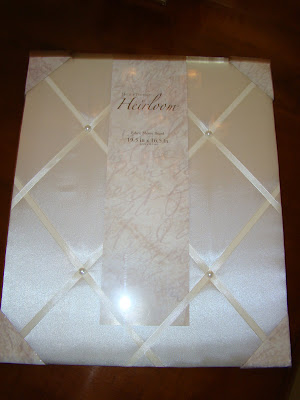 I have been cleaning out drawers and cupboards, though out the last few weeks. I found some photos containing many fond memories of our girls, in their growing up years. Most of the photos that I've taken, are now in photo books, but others that I have and just could not throw away. As I was walking through the Walmart store last week, I found this fabric board on a shelf below the photo albums. I purchased it for $10.00, thinking it would be a solution for my photos and would be a perfect, early birthday gift for my daughter. 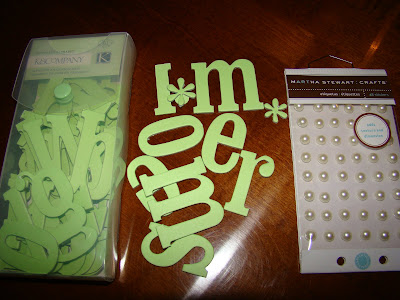 I purchased a pack of green chipboard alphabet letters, from the craft department of Walmart. And, since there were white pearls on the board already, I purchased a pack of pearl stickers at Michaels, to add texture and dimension to the pictures. I glued the letters on with a permanent glue stick. I must tell you, that there are only two "o"s in one pack of letters. I cut off part of the "q" to have another "o" for the word "of", just in case you would like to use the same wording. 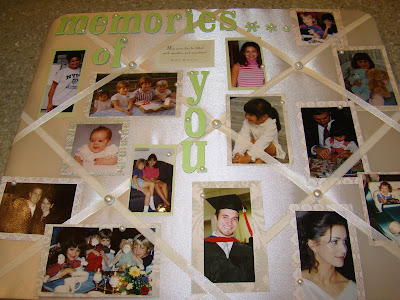 I cut and mounted each photo, on some soft green and tan background paper that I had on hand. The pictures can be removed at any time and others added, just by slipping the photos under the ribbons. I'll send this to her as a reminder of events in her life. Personal gifts are so meaningful. If you happen to find some valuable photos from the past, this is just one simple idea on how to display them.


Posted by Just a little something from Judy at 9:35 PM

Aunt Judy- I am new to your blog, but I absolutely LOVE IT. Thanks for sharing ALL your creative ideas. I want so badly to use some of them to encourage people the way you have encouraged me so many times! And the peanut butter cookies look amazing. :-) Love you