How We Kept Them Occupied During Their Three Day Stay 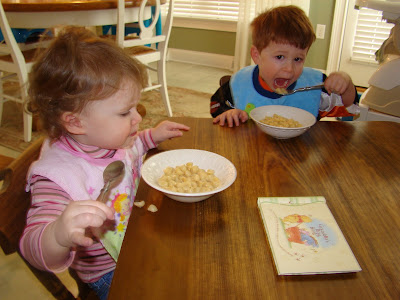 With three of our grandchildren staying with us for three days, while their parent celebrated their 5th anniversary, we worked hard to find things to do that would keep their interest. Being the ages of a 2 year old, 1 year old and 7 months old, that in itself was a bit challenging. Eating macaroni and cheese was a big hit, along with blueberries, bananas, cheese, pretzels and pizza for the oldest two. The youngest one loves her bottle. For a special treat the two oldest ones got to eat at the little table instead of their booster seat and high chair. After all, what are a few crumbs on the floor, when you are having fun? 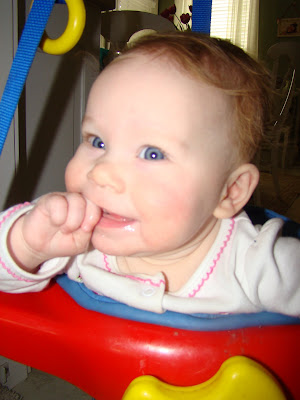 The jumping swing was always a hit with the youngest one. She would smile, jump and swing, content in her own little world. What a joy to watch her!! 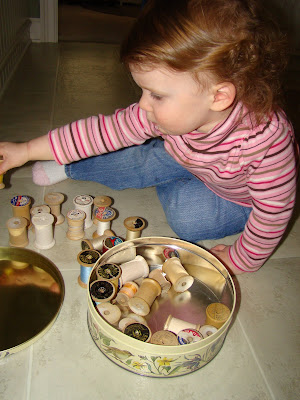 By Sunday afternoon, I was running out of creative ideas as to what to do next with the older two? So, out comes the big tin my mother gave to me years ago. It is filled with wooden spools of thread that she saved from the days when she spent sitting at her sewing machine. She saved them because I was told," they don't make them out of wood anymore". To these two grandchildren, this tin filled with wooden spools was a brand new concept in toys. They eagerly emptied the spools onto the floor. 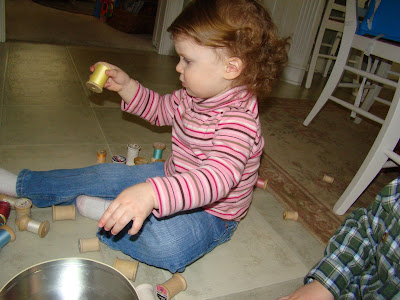 Here my granddaughter discovers thread for the first time. You can almost read her mind on this picture, thinking"what in the world is this, as she pulls the thread from the spool?" 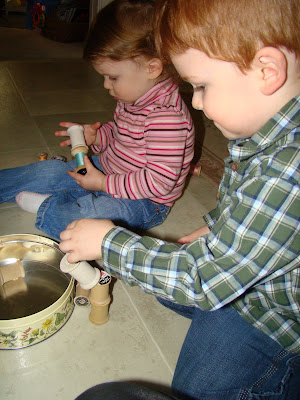 Together they investigate this new game, with me telling them what they are and what FUN things they could do with these spools. After all, what could be more exciting than this??? 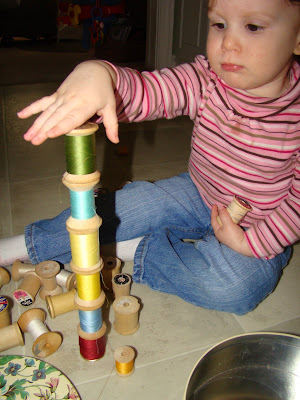 I encouraged them to see how high of a tower they could build with the spools before they crashed to the ground. By now, day three, you can see that I was pulling out all of the stops, to give them a good time...this just was great fun!!!! 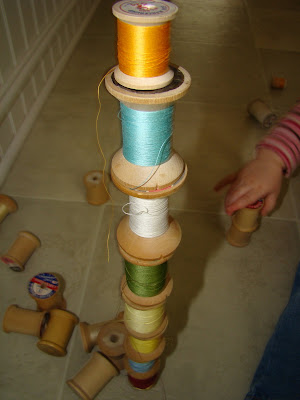 Aren't you impressed with their tower? Looking at these spools took me back to the years, the fabrics, and my dear mother sitting at her sewing machine, creating beautiful clothing for me and my sisters. It was interesting seeing the low prices on the spools of thread. The lowest price I found was 20 cents a spool. My how times have changed? Of course, when was the last time I purchased a spool of thread? 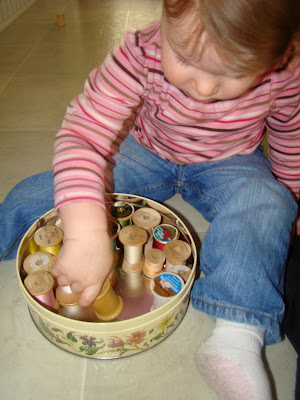 Another aspect to this project...try to fit them all back in like they had been. By now she is probably thinking..."it just doesn't get any more fun than this!!" 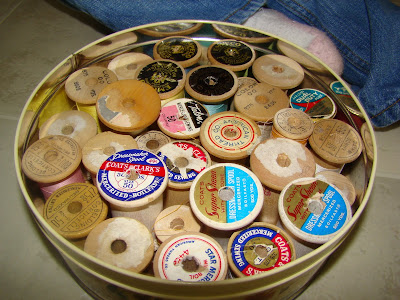 But between the two of us, we did it! Big brother lost all interest in this project, after the first five minutes. All in all, we had a memorable weekend with the three precious children, and a new appreciation for their parents, and their older brother, and time, work, and commitment involved with having three babies in a home. It was truly a great blessing to have them here with us.


Posted by Just a little something from Judy at 8:05 PM

Hi Judy, You are truly blessed! You have the most beautiful grandchildren. I don't know how you did it! I remember when my little ones would come over. It was so much fun but exhausting at the same time, We would stack paper cups of all things. They loved doing that.What a wonderful weekend you must have had and you have created warm memories that will last a life time.

What a fun weekend for you. Today is relax day? =) I wonder sometimes what 'antiques' our children will give their children to play with....... the old cell phone, the wireless mouse... will they laugh at the size of our neat little laptops, etc....

Aww . . . they are so cute. You had a good idea to bring out the wooden spools. Sometimes the smallest things will keep kids occupied for hours ~ at least until the newness wears off. So nice that your daughter and her husband could get away and know that the children were being so well-loved and taken care of.

You're a fun grandma! I think the food you mentioned & the creativity of thte games must've made your grandchildren enjoy their time w/ you!

We're sitting here looking at these pictures, and the eyes of A & C are all lit up! They keep saying "Mawmaw and Pawpaw!!!". C. finally stopped crying out for Pawpaw on the second half of the trip home. Curt and i kept saying "At least we know he is and will be close to his grandpa!!", even though the grief was LOUD in the van!!! :)

It looks like everyone had a wonderful family time together.

O those moments with the grand babies! So precious.

Oh...what fun! I had to laugh when I saw the spools...that brought back memories. Our oldest two grands (twin girls) ignored all the toys in favour of playing with my box of spools...when they were little.

Precious grandchildren...great memories...and now you will need some 'rest and relaxation'.

What cute grandkids! My mom loves to have mine visit too. They looked like they were having a great time!

What fun! Hope you're getting a chance to rest up a bit today. You just never know what kinds of things kids will enjoy! The tin of spools reminded me of visiting my Grandma as a little girl. She had tins filled with different sewing notions. I think my favorite was probably the one that held all the buttons. = ) No doubt your daughter and son-in-law had a wonderful time away. Thanks for sharing these sweet photos!