Not Your Standard "Birthday Cake" 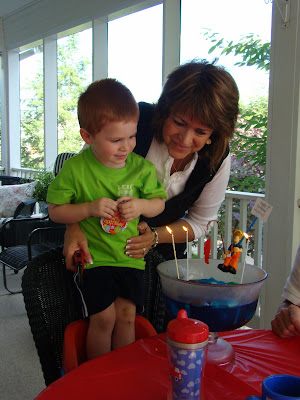 We celebrated his 3rd birthday on the porch this evening. I thought I would share his "birthday cake" with you. He went fishing with his dad and brother, with his own little fishing rod. So I decided to use fishing as the theme of his "cake". In a big glass bowl I made four small boxes of blue jello with the box directions of four cups of boiling water and four cups of cold water. I refrigerated the bowl until partially set. At this time I used a stick and gummy fish. I pushed some of the bright colored fish to the bottom, some part way up and laid some of the fish on top. I refrigerated the bowl of jello until firmly set. I found this little bendable guy at the toy store, and bent him to a seating position, and hot glued him lightly to the edge of the bowl. I found a stick outside and hot glued it to his hand. I tied fishing string to the stick and pierced a gummy fish and took the string up through it. I took a blue colored plastic stirrer and hot glued a "Happy 3rd Birthday" sign to it and hot glued it to his other hand. I used three tall thin birthday candles to the jello when it was firm enough to hold them. 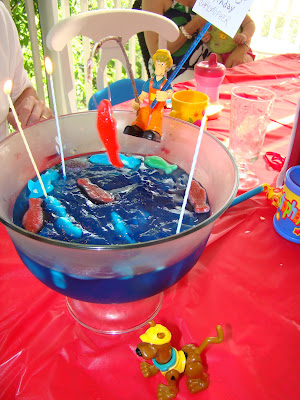 It was a hit with him. It did look like water and fish swimming in it, if you used your imagination. Little guys can do that, thank goodness. 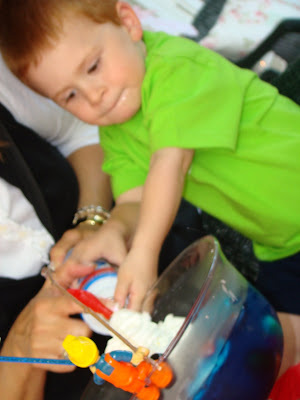 To add a bit more fun to the "birthday cake" idea, I gave him a can of spray whipped cream to add to the top. This was a new concept to him and he quickly learned to control the nozzle, adding more whipped cream than you can imagine. Okay...it was his birthday and birthdays are exceptions to the rules...right??? Another easy, quick and inexpensive way to celebrate a child's birthday. It has been a long day and I am tired. I usually don't post twice on one day, but I thought I'd share this "cake" idea. Good night!! ps. the man that was hot glued to the edge of the bowl, came right off when pressure was applied and it did not hurt the glass bowl
Posted by Just a little something from Judy at 8:18 PM

What a wonderful idea. That could be done with a lot of different themes. Thanks for sharing. Blessings
QMM

I have two big boys celebrating a birthday tomorrow...and they went fishing not long ago...what do you think?

It is so fun being a creative grandmother, even if it is tiring :]

How cool! No doubt it's a birthday he'll never forget. Afterall, how many little guys have a gummy fishing experience on their list of memorable life events?

Just found your blog and have read through many of your posts!! I love how you celebrate family!! I too have been married 33 years, and have three children. I have almost two grandchildren (one is on the way) and hope to have many more. I also know the Grace of my heavenly Father! We have a lot in common. So glad I found your blog!

Once again you blow my mind, Judy! Your creativity is a gift from God! Thank you for sharing your creative wisdom with us! We ALL love it!

By the way, I've used your ice cream in the sand bucket idea with the graham cracker sand twice already! I did individual sand buckets & wrote their names on the buckets. I also used the fake rocks made out of chocolate. It was a hit! THANK YOU!!!!

What a fun idea for your young fisherman! I especially love that little man sitting on the side of the bowl. I bet he had a blast with that whipped cream and yes, fun like that is what birthdays are all about! = ) Thanks for sharing this with us!

You never cease to amaze me Judy! What a wonderful idea and I bet your little guy will remember that for a long time!!

I love it! He must think you are the most excited grandma to visit, you're so creative! Too cute...but the little guy is even cuter!

What an adorable idea, Judy. He will have happy memories of this birthday and special cake for the rest of his life. I love the expression on his face when he is using the whip cream. Precious.

That is the cutest thing I have ever seen. You are so creative! I love it. Happy Birthday to your little guy ♥

He truly LOVED that birthday 'cake'...it was worth the week-long wait (which is when he started asking about his birthday cake!). What a fortunate little guy to have YOU as his 'mawmaw'! He still has his helicopter tightly by his side...BIG TIME hit!!! Thanks a million for making his day everything he 'dreamed' it would be!! :)

Love your unique and adorable ideas...you need to open a creative cake shop!

Wow what a great idea, I would have never thought of that. You are very creative.

Have a blessed weekend.

Judy, this is so clever...you are just the best grandmother ever! I love that you let him experiment...how wonderful is that?!

Thanks for sharing these special moments with us. You make me smile.

Awesome!!! Happy Birthday to that precious cutie!!! You are so creative Judy (smile).

I love ya. I miss my daily visits with you.

What fun! You really outdid yourself and that little one got a super special cake. By the look on his face I think it was a hit. You are a wonderful grandma and so creative. Love all that you do!

This is such a cute idea Judy! I can't wait till I'm able to bake some goodies for my grandson. He's only 7 months old so I have a little way to go.