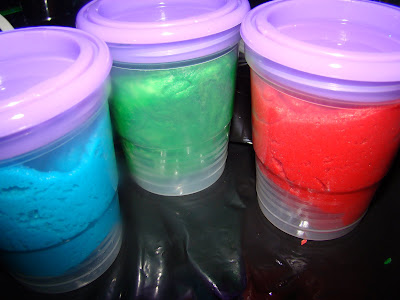 It is a cool, overcast day. I have three little ones. I am running out of ideas and for those of you who know me, you probably find this difficult to believe. I went to the cupboard and pulled out my "Good Things for Kids" from summer 2007. It is created by Martha Stewart, and it features, easy ideas for fun parties. I found the page that has the simple recipe for making homemade play dough. Here is the recipe;
Play Dough
"This homemade modeling dough is a cinch for kids to mke; give them premeasured ingredients to make it even easier." (I have real young children so I made it myself, without them knowing it. I thought it would be better to surprise them when it was finished. Imagine what would happen if it did not turn out right, and they were anticipating it.)
1 cup flour
1/2 cup salt
3 tablespoons vegtable oil
1/3 cup of water tinted with 17 drops of food coloring(I doubled this recipe).
Stir flour, salt, and vegetable oil in medium bowl with a wooden spoon. Add colored water, and knead with hands(I used rubber gloves) until smooth. If the dough is crumbly, add more oil; if it's sticky, add flour. Store in an airtight container in thr refrigerator four up to two weeks. (I found it does last longer than this). It produces vibrant colored play dough. 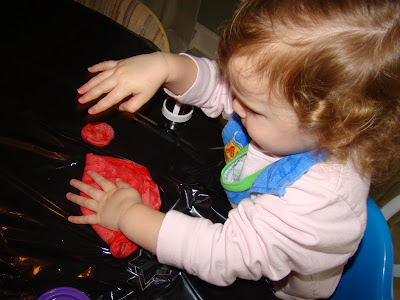 I put old bibs on them, covered the wooden table with plastic 33 gallon garbage bags, got out my cookie cutter, plastic flower sticks, little American flags... and the fun began. For the next two hours, they played, they created, they imagined. My only rules...do not mix the colors, and keep it away from the edge of the table. My littlest granddaughter was intriqued for a short amount of time, and then she wanted to eat it. Now, that is one of the good aspects of this play dough...it can't hurt them, although ususally the salty taste eliminates the second taste. The older of the two girls pictured above, was thrilled with this venture. 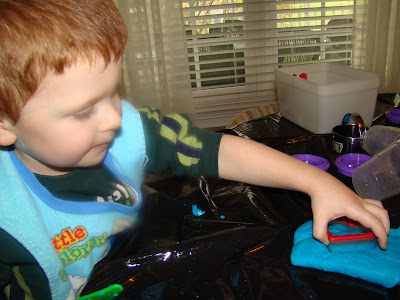 As was her brother. He actually surprised me with his creativity. 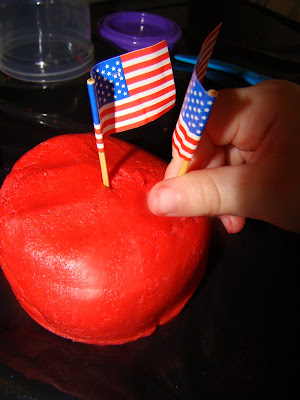 Here was the blob of red dough, where she added her two little flags. She was excited to put them somewhere. 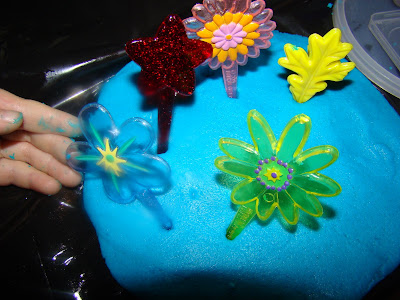 They made a flower garden with these little plastic stick flowers that I saved from desserts my family was served, a few years ago. They were going to let them lay on the table, so I collected them and put them away. Why do I do that? Who would have thought that years later my little ones would want to create a flower garden out of play dough. 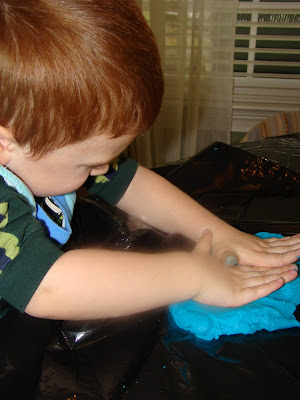 I taught them how to take their creations, roll it into a ball again, press it down to a flat surface, and start all over again. Time and time again, this took place. I love this picture. It shows just how seriously he took this challenge. 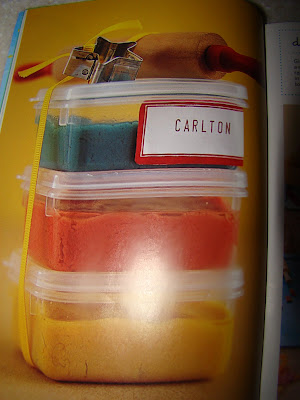 Here is the idea that the magazine used to package the dough for a party. I thought it was a great idea giving each child at the party, an individualized package like this to take home. I like how she added the small wooden rolling pins onto each package.

Here is my idea if you want to make the play dough for a gift for a child in your life. The small purple plastic containers were purchased from Walmart last year. I put different colors in each container, laid them on their sides on clear cellophane paper(this comes in rolls at the craft stores), rolled them up and tied each end with ribbon. I added small cookie cutters to each side, purchased from a craft store also. It is a fun and very inexpensive gift for a child. I like the consistancy of this play dough better than the store bought variety. This could be a fun "grandma gift" to take on a visit to see your grandchildren.

Posted by Just a little something from Judy at 12:21 PM

I'm tired of cleaning - can I come and play with playdough at your house today? Likes like much more fun. =) Fantabulous colors of play dough.

See that is the difference between me and you...after a week of having the 3 of them, i would've played a game called "who can stay in Grandma's walk-in closet the longest without talking?" Then I would go over and lay on my bed and nap. :) Perhaps this is why YOU are the grandma and I am raising a 6'2" 15 yr old genius who knows all things! Hmmm....
God Love Ya,
Your sister Lou :)

I love the idea of packing up the play dough to take to their place! I remember the days of play dough stuck to everything...and have so far stayed away from having play dough at grammy's house. But now this looks...oh, so tempting...and I do have a basement!

I was impressed that you made this playdough for your grandchildren and even more impressed by your ideas for gift giving. I am storing all of these good grandma ideas that I see on your blog and others for the day that I become a grandma. The pictures are so cute and such clever creations they have come up with.

I wish I could have visited and played along. Love the idea of making play dough!

Love the photos. Your grandchildren are so adorable Judy.

Oh,
I haven't made play dough in ages. This looks like so much fun!
The colors are fantastic and I love ALL the gift ideas.
I think I will make some for a Thanksgiivng idea for the kids! Thanks~♥

Love the ideas.
This stuff would be perfect for my special needs students.

You have an unlimited (if not magical) supply of fabulous ideas. I'll bet you even think of things to do, or bake, or share in your sleep.

I'm thinking "grandma" had more fun than the babes! How blessed they are to be learning at your feet.

Fantastic idea Judy! I'm sending this post to my daughter-in-law who teaches kindergarten, as she might want to print out the play dough recipe for her student's parents. She can also keep it in mind as a party favor to give away when my grandson is a little older.