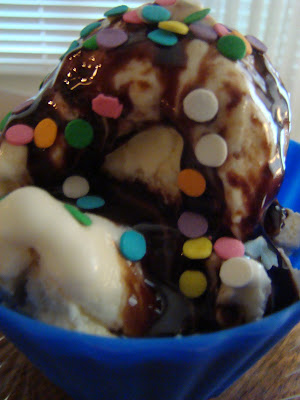 Story by Rochelle M. Pennington. "I stopped at Dairy Queen, purchased a sandwich, and sat down in the crowded dining room next to a family celebrating their son's basketball game over an ice- cream cake. Since the isles were especially narrow, I soon felt like I was a part of the party. "So, your team must have won this afternoon," I commented. The little fellow smiled and wholeheartedly announced, "No, we lost 24 - 2." "Well, you must have made the only basket then, " I said. "No, I missed all of the eight shotsI took, but three of them did hit the rim." This child was elated. I was confused. They were celebrating because his team lost the game and because he had missed eight baskets! Seldom am I at a loss for words, but the only response I could muster up at that moment was a blank stare and a very large, insincere looking smile. Absolutely no clue. After another mouthful of cake, and still grinning from ear to ear, he added, "We're having a party because last week I missed nine shots and none of them even came near to the backboard. Dad says that all of my practicing must have paid off. I'm making progress." ----Reminder to me to take time to celebrate other's accomplishments, no matter how small they may appear to be.

Posted by Just a little something from Judy at 8:17 AM

Judy, that story is so precious.

I loved this! I hope you have a happy weekend ♥

A friend recently shared that if she went home with a 98% on a paper, her Mom would say, "That's good, but what can we do to make it better next time?" She's now quite an accomplished attorney yet still struggles at times with feeling as though she doesn't "measure up." She's trying hard to be the kind of Mom who celebrates her child's true efforts more than the final result. At her house, you're more likely to hear "you got a B on the test? Well let's go celebrate with ice cream!" Encouraging our kids is so important! This story illustrates that perfectly.

Have a great weekend!
Tracy

"Sweet" post. (: You have a nice blog. Thanks for letting me visit.

Hi Judy,
That is a very sweet story. Loved reading it. What a wonderful way to make a child feel good about himself.

Thanks for your sweet comments yesterday. I am overdue for a new post and hope to have one up this weekend.

I hope you have a wonderful weekend.

I'm a third grade teacher, so this story hits home with me. It's so easy to set high expectations for kids and to overlook their small accomplishments! I don't always meet it, but my goal is to appreciate all progress a child makes...no matter how small.

Great post and lovely ice cream!!
Thanks for your message on my blog. I do need to add another post soon, had a very hectic few weeks tinged with some sadness. We had to have our dear old (161/2) dog put to sleep last Saturday then we found out that my mother in law has lung cancer. She had a mastectomy 10 years ago. She is 84 and really doesnt need this at her age. But God knows and we pray that she will draw closer to Him through all of this. I will post again soon!Thanks for 'visiting'!