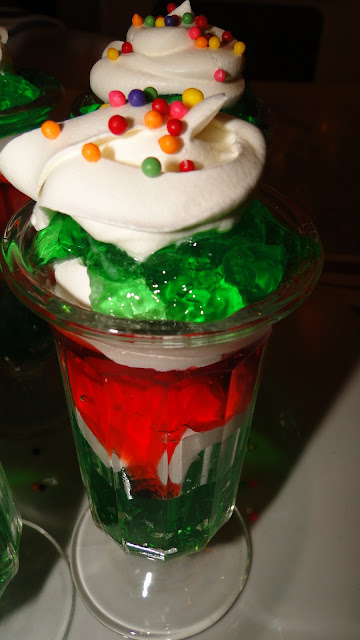 Seaching for ways to learn at home, when it is cool and raining.
Decided on a cooking class for two young ones that always want to learn, and since their younger sister was taking an afternoon nap:), it seemed like the best time. 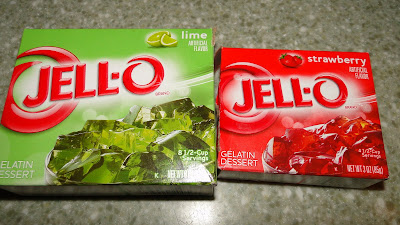 Found two boxes of Jello in my pantry.  One was opened and partially used(because I sometimes use a teaspoon or two of the dry Jello to make my icings).  Decided to go with it anyway.  We made a pan of green Jello and a smaller one of the red Jello.  I look at Jello as comfort food because it brings back many memories of my childhood.  My mother made Jello so often, in  many different ways.  I never make Jello without thinking of her.  Since she lives downstairs, we had her come and see what we made.

Today, I was also thinking and praying for one of my very dear friends.  She is facing her second round of Chemotherapy and my heart hurts for her.  Somehow, praying and making Jello seemed to help. I prayed that she wouldn't get as sick as the last time she went through it.

As you can see my two helpers were eager to get started. I love their enthusiasm. 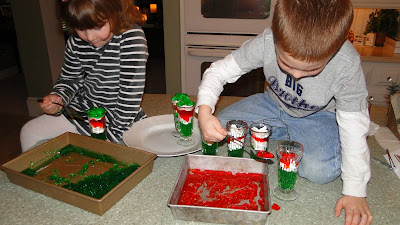 Yes, they were allowed to sit on my large kitchen island for this class.  We took my old glass ice cream parfaits and one filled with the green Jello, then I added the Cool Whip, then the other one added the red.  Back and forth we went, they both took  the chore seriously.  I explained that green and red were Christmas colors and that we were creating a dessert that would be perfect for the holiday season.
I was surprised how far one and a half boxes of Jello went in making the dessert. 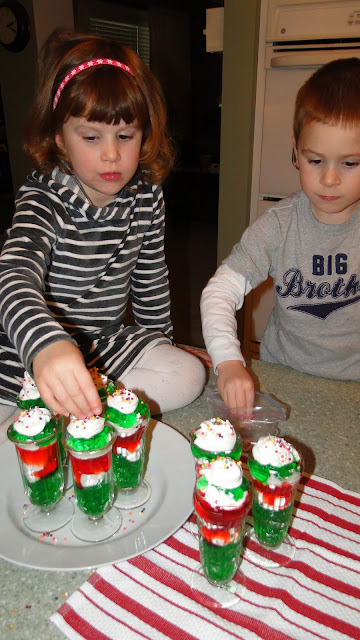 Time for the sprinkles.  My mother always taught me that people eat with their eyes first and then they taste.  She said, "make sure it looks appealing to others".
I would say these two received another lesson on this today.  They were so pleased with their finished project.  Aside from accidently dropping the small container of sprinkles, it was a fun afternoon.  You can only imagine the cleanup involved in 5000 sprinkles all over one's kitchen floor:) 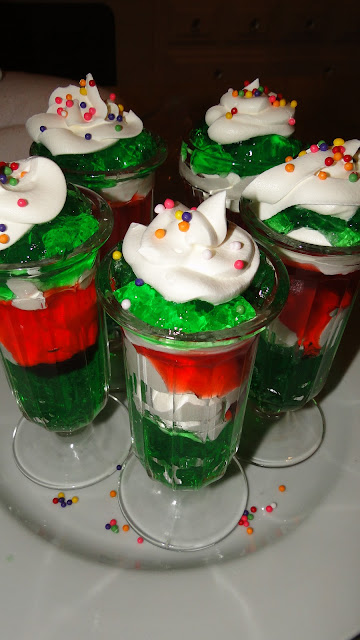 They can't wait to surprise their Pawpaw this evening, when they serve this to everyone for dessert. 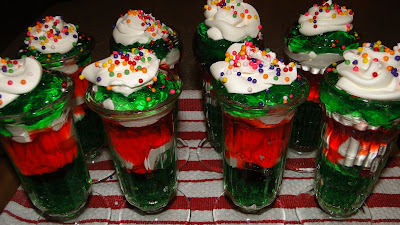 What do you think about our simple project?
Do you think our dessert has eye appeal?
FYI...
"Frank Woodward, a school dropout and, who by the age of 20 had his own business, bought the rights to Jell-O for $ 450.  Among the products Woodward marketed were several patent medicines, Raccoon Corn Plasters, and a roasted coffee substitute called Grain-O.  Sales were slow, so Woodward offered to sell the rights to Jell-O to his plant superintendent for $ 35.  However, before the final sale, intensive advertising paid off.  By 1906, sales reached $ 1 million.  Woodward's Genesee Pure Food Company was renamed Jell-O Company in 1923, and later merged with Postum Cereal to become the General Foods Corporation."
~The History of Jello ~ About.com.
How is that for some interesting trivia?
So you see Jello has been around for a long, long time.
Today, we had fun making it again.
Thanks for stopping by.
Posted by Just a little something from Judy at 4:38 PM

And what a fun classroom for your grands. I'm sure Pawpaw was thrilled with his Christmassy dessert.

I hope your vacuum cleaner managed to find all 5000 sprinkles!

A fun post! I wanted to comment that when I saw the photo in your blog banner I was reminded of my childhood when I had a little white stove and refrigerator very similar. I remember how excited I was when I received them.

"People eat with their eyes first." How true!

What a simple, memory-making craft. You're passing along your penchant here, just as your mother's done for you. Priceless!

Jello makes me grin. Mother made more concoctions with it than I can now recall. My favorite was one that called for shredded carrot & pineapple.

I would imagine those little students had equal fun eating their creations.

Some of the smartest people I know, dropped out of school.

Yes, very eye appealing and I bet yummy, too!

Tell the Jr. chef's they did a great job, looks yummy, I might have to make some for myself. What a blessing to have your little ones so close by to make such special memories with them.

Judy you amaze me! I love how you take something simple & make it beautiful! You even teach your grandchildren about the meanings of colors! I am so blessed to know you! Thanks for sharing!

Lots of fun going on here. I have the girls tomorrow morning and was thinking about making Christmas ornaments...but this looks like a winner! I think I even have cool whip =)

Love your post! Well, I love all of your posts. I always make a point to stop by even though I'm a bad blogger and don't always leave a comment. I hope you will forgive me. Judy I get so much inspiratin from your blog. Truly it is a joy to visit here. Your parfaits are so festive! I saw on you blog one day where you had little dessert glasses so I went out and purchased the mini parfaits. I think for Christmas Eve I will grab your idea and fill them with jello and whipped cream. I think everyone in our family will love them. Thank you once again. I hope you have a lovely weekend ♥

Oh my goodness you did a little great job of teaching those sweet little ones. And your mothers words 'people eat with their eyes first and then they taste' are certainly true and good to remember. I will pray for your friend too.