Celebrating The Pretty Blooms And Blossums Of The Season 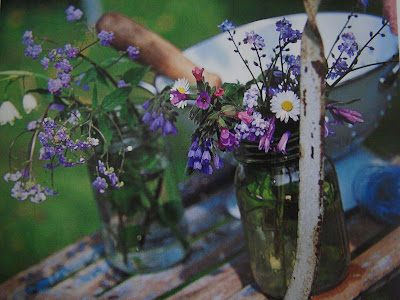 I cannot get enough of the gorgeous photography displayed in the "Country Living British Edition" magazine. It is a magazine that I can't discard or give away because of the beauty in it's pages. These particular photos are from the April 2008 edition, in an article titled "Spring Collection". "Gather and arrange your favorite flowers in an array of country containers to brighten corners of your home and garden. Then sit back and revel in their cheering spring colors and subtle, uplifting scents." 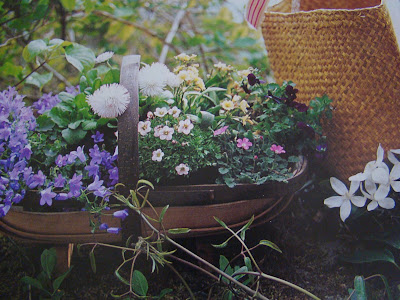 "Arrange small bunches in jugs or jam jars, or stand a single bough of blossom in a vase." 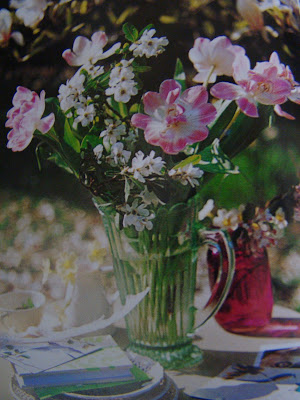 "Pick bunches of fresh spring flowers from your garden to give to friends and neighbors."

"One afternoon when I was about 18 years old, I left our house and walked the four blocks to the downtown area, hoping to find someone or something to lift my spirits.

I found a friend working at a shop, and her day was even worse than mine. As I walked on though, I passed an open-air flower stand with some of the season's first daffodils. Their cheerful sunniness stood out in dramatic contrast to the drippy gray of the streets and the skies. I purchased a half dozen, knowing that they would brighten my room at home.

On the way home, I stopped and gave a couple of them to my friend, hoping to cheer her up. A little bit further along my route, I encountered a lighthearted street person who commented on the flowers. I gave him one too.

At the last corner before my house, there was a shop that I passed nearly every day on my way to and from church and school. My path often crossed with a man who worked there-his big, booming voice a disconcerting contrast to the disabled body in his wheelchair. His greeting was always warm and friendly, but I was intimidated and usually kept my response brief as I hurried on my way.

On this day, my feet took over and I walked past the crosswalk and into the store before my mind had a chance to stop them. I walked up to the counter, and thrust the three remaining daffodils toward him saying, "These are for you, because daffodils are cheerful and you're always cheerful." Still in disbelief at what I had done, I turned and left before he had an opportunity to respond.

I walked home the remaining block a different person. Even though I went without the flowers that I had purchased to cheer myself, the sunshine that came from my heart illuminated my path as though the sun itself had broken through the clouds. The simple act of giving away something that I wanted changed me. I was no longer intimidated by the man at the shop in the corner. I had seen a glimmer that I could be a giving person."

"Plant a word of love heart-deep in a person's life. Nurture it with a smile and a prayer and watch what happens." Max Lucado

Posted by Just a little something from Judy at 9:51 AM

If someone would have asked me to read this story and then ask who it reminds me of my immediate response would have been YOU!
It truly is a blessing to give.

This is a beautiful sharing and flowers. You are such a beautiful gift to all of us online Judy. Thank you for your heart to share with all of us.

This is an amazingly beautiful post. Both in pictures and words. I found it deeply touching. Makes me want to give my flowers away. I have some blooming in my yard. Just might have to cut them off today.

Inspiring words and pictures once again! I'm off to find some suitable jars/vases...and pick some lovely blooms...to brighten the corner where I am.

Judy, you are truly one of the most gracious ladies I have known. Bless you for your kind and loving heart.

I am richer because of you and your blog.

What a beautiful story and it just further proves that giving 'sunshine' to others in words, deed or things only brings that much goodness right back to us, no matter how bad we may feel!

Thank you for the blessing of this story and the beautiful pictures!

What a beautiful and delightful story Judy. I loved it. It's always better to give than to recieve. The pictures of the flowers are amazing. I can see why you love that magazine. Thank you for adding a little sunshine to my day :>)

This story touched my heart!! I love the idea of having flowers in those glass containers around the house - but I also LOVE the idea of giving someone an unexpected bouquet!

Judy, this was an amazing post. It gave me cold chills. Well written and so inspiring. Blessings back at ya.
QMM

Your photos are just beautiful. Laurie

Love these photo's. I need to spend some time doing a little flower arranging this weekend. One of my favorite hobbies.