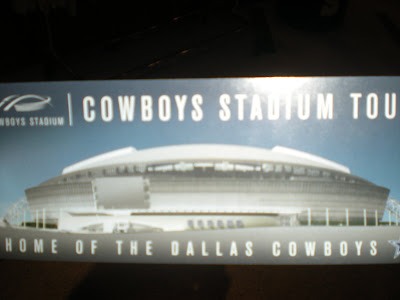 Our visit with our daughter and son-in-law was wonderful! While there we celebrated the birthdays by taking a tour of the new Dallas Cowboy's Stadium on Saturday morning. First of all, let it be known that my husband and I are not Cowboy fans, and we timidly raised our hands when they asked if there were fans in the audience, from other teams. I must admit though, that this stadium tour was the most impressive tour that we have taken in our lifetime. The architecture, the design, the decor, the massiveness, and the building of this stadium was beyond what my small mind could comprehend. The total square footage is 3 million square feet. The entire Statue of Liberty and its base could fit into the stadium with the roof closed. It is also the world's largest column-free room. The American Airlines Center in Dallas could fit entirely into the new stadium at field level. It is the largest enclosed stadium(in cubic feet) in the NFL. 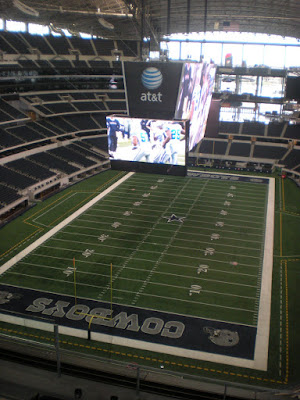 It has a seating capacity of 80,000 plus standing room or additional seating in the end zones, along with thicketed areas in the end zone plazas can increase total capacity to 100,000. 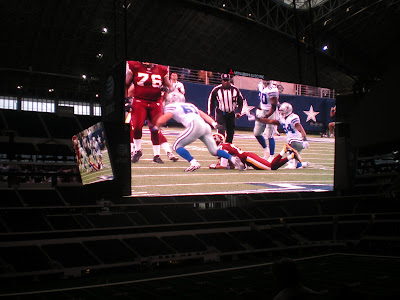 The flat screen television in the center of this complex is one of the largest(if not the largest), in the world. There are not words for me to describe the enormity of this screen. I think if I ever had the privilege of attending a game in this stadium, I would spend my time watching the screen instead of the field. 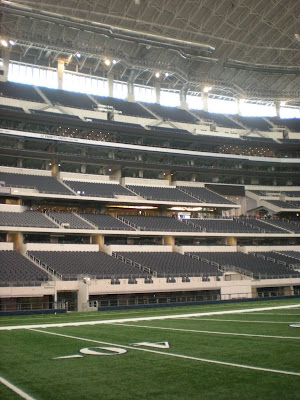 The expansive retractable roof is the largest of its kind in the world and measures approximately 661,000 square feet. 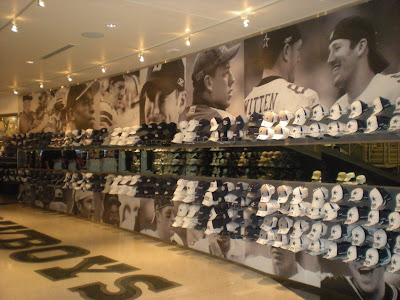 The gift shop was amazing! I never realized that so much was available with the Cowboy's logo on it. 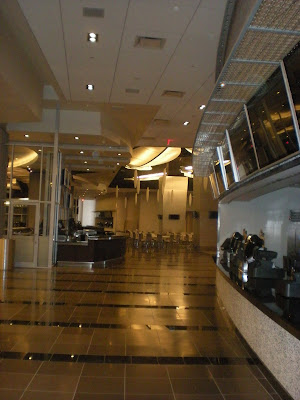 This is one of the beautifully decorated concession stands and eating areas. Notice the football lights hanging from the ceiling. There are several hundred concession stands within this structure. I can't repeat the number exactly, but I know it was in the hundreds, because our tour guides has everyone guess how many it had. 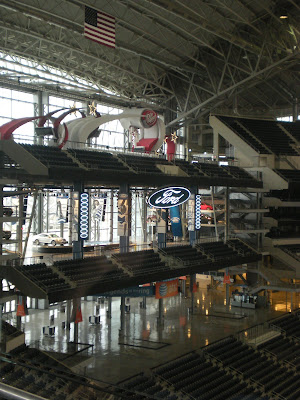 Ford Motor Co. has new cars on display in the glass section...many new vehicles. If you look carefully you will see them. 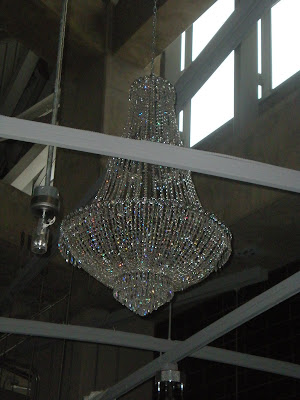 Outside of the offices of the Cotton Bowl floor of the stadium, was another eating area. This one had gorgeous crystal chandeliers hanging from the ceiling. There were at least five different designed chandeliers in this eating section. This was truly a new concept to me...crystal chandeliers in a football stadium. We were told however by the tour guides, that Jerry Jones wife did quite a bit of the decorating in the complex. 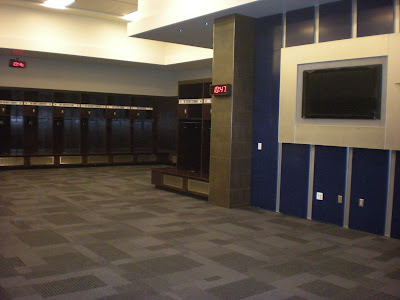 This is the Cowboy's locker room, and yes we had the privilege of spending some time in it, and were told to feel free to take pictures. 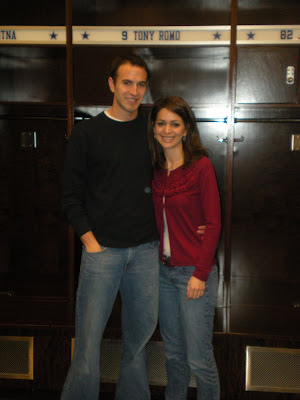 I am sure she wouldn't have guessed that she would be standing at Tony Romo's personal locker on her 25th birthday. 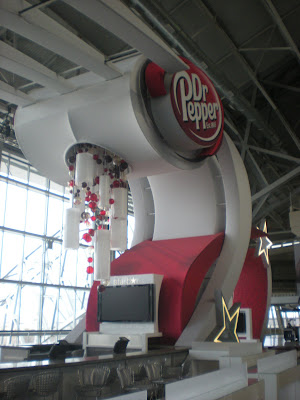 The largest Dr. Pepper display that I have ever seen. I liked all of the brilliantly colored glass ball lights that were hanging in the middle. The design and decor was amazing to me. 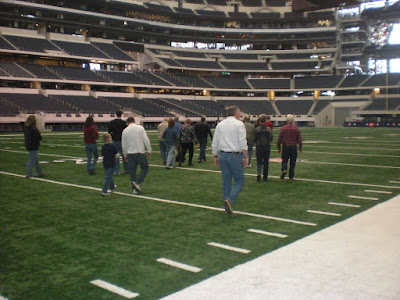 Walking on the artificial turf field left me feeling small compared to the vastness of this place. 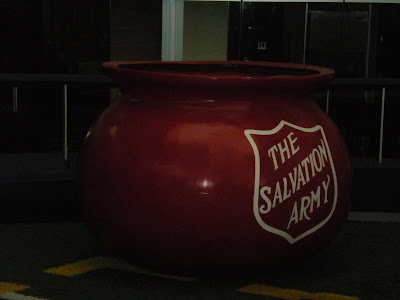 We were told that the Salvation Army was the charity of choice, for Jerry Jones, the Cowboy's owner. Four of these huge pots occupied the four corners of the field.
I thought to myself, "wouldn't it be a great idea, if at each sporting event held here, each patron would put a 1.00 in the big red pot to be used by this wonderful charity. Just think what huge gifts would be created with every happening. Maybe Haiti could benefit from this. Just my idea. 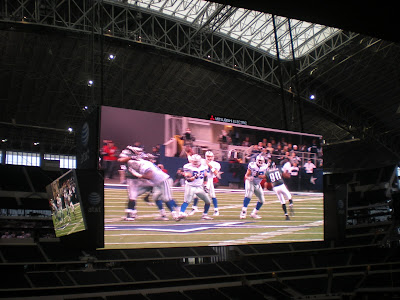 Another look at the huge screen and the big side screens. 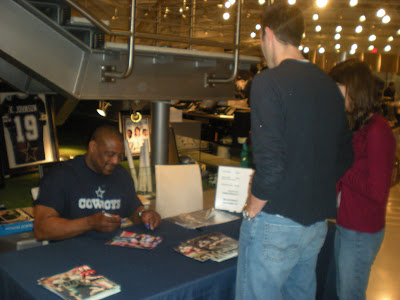 A former player, Eugene Lockhart was on hand after the tour for autographs.
Whether you are a football fan or not, I hope you enjoyed this abbreviated tour. It did create a special memory for the four of us. This tour is open to anyone visiting the Dallas area. It is a good idea to call ahead and reserve space.

I want to thank you for the kind birthday wishes you extended to my husband and my daughter. I look forward to visiting your blogs as soon as I find the time.


Posted by Just a little something from Judy at 6:47 AM

WOW! What an amazing complex!

This would qualify for a commercial... I'm sure Jerry Jones would love this blog! What fun... our kids were there for one of the last games this year and our son's company had one of the glassed in suites. They sure had a ball!
Beautiful pictures....

Totally awesome pictures....that is some stadium!

WOW! I am impressed. Can anyone take this tour? If you have a minute, let me know. Thanks!

Glad you had a great visit with your family. The tour looks amazing, my youngest son would have loved to have been there! Ad yes the Salvation Army collcetion pots are a great idea!

Yes, the tour is open to the public and I think it is open 6 days a week. It is good to make reservations due to the number of guests that visit the stadium.

Thoughts on Life and Millinery. said...

Missed seeing this as we left Dallas in 2001. Whoo wee...the Cowboys are rockin' it now! Thanks for taking the great pictures!

Beautiful photos! Glad you and your family had a great time!

Good golly-- HUGE I say HUGE.
Looks like you guys had a lot of fun and getting to walk on the field too. Whooo hoo!

Mom-LOVED having you visit! We had so much fun. I can't think of a more special way to spend my birthday than with you guys! Thanks for treating us to the tour and everything else. You're the best! Love you!
ps. I'm impressed by all the stats! You must have been taking notes during the tour.:)

Belated happy birthday to you beautiful daughter and to your loving husband!

I enjoyed seeing the Dallas Stadium through your eyes...it is an amazing structure!

Wow! What an amazing stadium! I had NO idea! Glad you had such a great time with your daughter and son-in-love. Welcome back! Thanks for sharing those great photos. = )

WOW! That place is HUGE !
Thanks for sharing the pics tho!
Stephanie

Wow, that is amazing!! I can only think it was even more amazing in person. I am going to show this post to my husband and sons. They are big sports fans.
Glad you were able to be with your daughter to celebrate her birthday.

Thanks for taking us along on the tour. How nice to see it 'up close and personal'...through your lens. It looks like a amazing stadium...whatever team you might be supporting. And how fun to tour it as part of your family birthday celebrations!